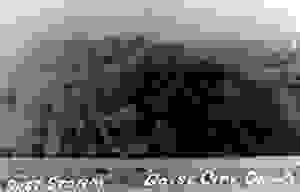 Excerpts from “The Dust Bowl, Men, Dirt and Depression” by Paul Bonnifield

“Dust Bowl” was a term born in the hard times from the people who lived in the drought-stricken region during the great depression. The term was first used in a dispatch from Robert Geiger, an AP correspondent in Guymon, and within a few short hours the term was used all over the nation. The Dust Bowl Days”, also known as the “Dirty Thirties”, took its toll on Cimarron County. The decade was full of extremes: blizzards, tornadoes, floods, droughts, and dirt storms.

In 1930 and 1931 , the decade opened with unparalleled prosperity and growth. NATION’S BUSINESS magazine labeled the panhandles of Oklahoma and Texas as the most prosperous region. The Panhandle was marked contrast to the long soup lines of the Eastern United States.

Farming in the Panhandle

Wheat was a real good thing. The world needed it and was paying a good price for it. Wheat farmers with tractors, one-way plows and combines purchased by most farmers after the phenomenal crop of 1926, began plowing and planting wheat as never before. The lands were planted to wheat year after year without a thought as to the damage that was being done. Grasslands that should have never been plowed were plowed up. Millions of acres of farmland in the great plains were broken.

1929 was dry but most of the farmers made a wheat crop. In 1931 the wheat crop was considered a bumper crop with over twelve million bushels of wheat. Wheat was everywhere, in the elevators, on the ground, and in the road. The wheat supply forced the price down from sixty-eight cents/bushel in July 1930 to twenty-five cents/bushel in July 1931. Many farmers went broke and others abandoned their fields.

With continuing hard times and dry years, the farmers, who still had a lot of pioneering spirit and faith in the land, made ready to weather the storms. The old survival methods of pioneering were brought out of storage, dusted off and put into practice. Many farmers increased their milk cow herd. The cream from the cows was sold and the skim milk was fed to chickens and pigs.

When normal feed crops failed, thistles were harvested, and when thistles failed, hardy souls dug up soap weed which was chopped in a feed mill or by hand and fed to the stock. This was a back breaking, disheartening chore which would have broken weaker people. But to the credit of the residents of the Dust Bowl, they shouldered their task and carried on.

“I don’t know, we just made it.” The people of the region made it because they knew how to take the everyday practical things which had been used for years and adapt them to meet the crisis. Finding a way to make do or do differently was a way of life for the pioneers who had come to the region only a short time earlier. When they arrived there were no houses, wells, cars, telephones or fields. Times were hard when the land was settled, and the people knew how to live and grow in difficult periods.

In 1934 to 1936, three record drought years were marked for the nation. In 1936, a more severe storm spread out of the plains and across most of the nation. The drought years were accompanied with record breaking heavy rains, blizzards, tornadoes and floods. In September 1930, It rained over five inches in a very short time in the Oklahoma Panhandle. The flooding in Cimarron County was accompanied by a dirt storm which damaged several small buildings and graineries. Later that year, the regions were whipped again by a strong dirt storm from the southwest until the winds gave way to a blizzard from the north.

After the blizzards in the winter 1930-1931 the drought began. First the northern plains felt the dry spell, but by July the southern plains were in the drought. It was not until late September that the ground had enough water to justify planting. Because of the late planting and early frost, much of the wheat was small and weak when the spring winds of 1932 began to blow. The wheat was also beaten by dirt from the abandoned fields. In March there were twenty-two days of dirt storms and drifts began to build in the fence rows.

In late January 1933, the region was blasted by a magnificent dirt storm which killed much of the wheat. In early February the thermometer dropped seventy-four degrees in eighteen hours to a record low at Boise City. The mercury stated below freezing for several days until another dirt storm scourged the land. Before the year was over, locals counted 139 dirty days in 1933.

Although the dirt storms were fewer in 1934, it was the year which brought the Dust Bowl national attention. In May, a severe storm blew dirt from Texas, Oklahoma and Kansas as far east as New York City and Washington D.C. In spite of the terrific storm in May, the year 1934 was pleasant respite from the blowing dirt and tornadoes of the previous year. But nature had another trick up her sleeve, the year was extremely hot with new records being made and broken at regular intervals. Before the year had run its course, hundreds of people in Colorado, Texas, Oklahoma and Kansas had died from the heat.

In 1935, the weather in the Dust Bowl again made the national headlines. This storm was followed by another and yet another in rapid succession. In late March a severe storm lashed Boise City so hard that many people were stranded for hours. No one dared to leave a store and head for home although it might be less than a block away.

On Sunday April 14, 1935, the sun came up in a clear sky. The day was warm and pleasant, a gentle breeze whimpered out of the southwest. Suddenly a cloud appeared on the horizon. Birds flew swiftly ahead of it, but not swift enough for the cloud traveling at sixty miles per hour. This day, which many people of the area readily remember, was named “Black Sunday”.

By May, it seemed like the wind and dirt had been blowing for an eternity. Rain was an event occurring only in dreams. It was a year of intensive dirt storms, gales, rollers and floods mixed with economic depression, sickness and disaster. It was a year of extreme hardship, but surprisingly, the vast majority of the people stayed. By 1935 the unusual had become the usual, the extreme became the normal, the exception became the routine.

During 1936, the number of dirt storms increased and the temperature brok the 1934 record high by soaring above 120 degrees. On one pleasant June day in 1936, the ground began to tremble. A sharp earthquake shook the land from Kenton to Perryton and from Liberal to Stratford. By the fall of 1936, the rains began to return and the heat wave was broken. The following year, 1937 was another year of unprecedented dirt storms. Day after day, Dust Bowl farmers unwillingly traded farms as the land moved back and forth between Texas and Kansas. And of course there were the usual floods. 1938 was the year of the “snuster”. The snuster was a mixture of dirt and snow reaching blizzard proportions. The storm caused a tremendous amount of damage and suffering.